rthk.hk 香港電台網站: 功夫傳奇
I previously blogged this, but didn't realised the title was only in Chinese.
suggestion is that you bear it and watch it, if you have simple mandarin understanding,
especially recommended for those that have penchant for asian kung fu films, this is the real stuff!
we have to get UFCs in China and get some of these guys into the ring, my guess is that the present UFC Champs will be annihilated..
pure speculations of course! ;-)
Posted by AI King at 20:31 No comments:

Joi Ito's BBC - Podcasts - Interview and my thoughts of elitist clubs in purely on and off-line world.

Joi Ito is an investor in early stage internet projects and he has backed some big successes including twitter and flickr. He thinks that about one in ten of these start-ups returns a decent amount, but the big ones -- the Googles and the Yahoos -- come once every five years. The trick he says, is to be in position when they arrive and his formula for doing so is a curious mix of networking, Buddhist philosophy and serendipity.

http://downloads.bbc.co.uk/podcasts/worldservice/interview/interview_20100730-2332a.mp3
very interesting interview..
I have followed the startup scene for a while and this podcast explains how it works, with all these goodie goodie events (leWeb, WeF, TED, DLD), and scratching each other's backs.. and in some instances created brilliant companies.. and tweetups.. yes, generally its access for all, but glad its accepted that there is this elitist club that exists.
I also adopt the class 1 strategy of helping (in someway curating a non profit elitist club) but in the mostly offline business world.. but barrier to entry is much higher, sadly not as much return (yet) as they are all very focused and industries are mostly insulate from others so far (still, for real or perceived)!
Its definitely harder work but we are getting there!
very interesting indeed.
happy flying about and spending time on 'our causes'...
@GarethWong
Posted by AI King at 12:24 No comments:

economics of a gerbil/dwarf hamster in UK... 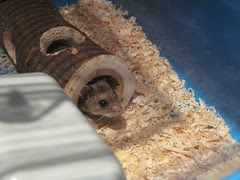 our dwarf hamster got pimple!?? or infection?
Originally uploaded by garethwong
OK

this is our limited experience so far,

it now has developed the above blister on nose..

apparently need to bring it to VET, to see the Vet, it will cost UKpounds £10.00 to see him/her at Pets at home, which does not include any treatment/medicines etc.

it would fend for itself in the wild (if it can survive).. and procreate..

China ratings agency says U.S. blocks it from entry | Reuters
I personally think they have a chance but not by trying to convince other regulators to approve them.
There is and must be another way, given the fact that China is the growth engine of the world economy whether or not Chinese Yuan devalues..
maybe one should look at ratings from another angle.
just a thoughts, if one could play a different game, why play the games that other has been playing and it has proven it is not optimal?
just a different point of view.
Posted by AI King at 18:26 No comments:

my 3 comments re Billionaire Brothers Looking To Move Up - Forbes.com

Billionaire Brothers Looking To Move Up - Forbes.com:
"The Fungs' interest in high-end fashion makes sense. According to a World Luxury Association Report, by the end of 2009 luxury product sales in mainland China accounted for about 25% of the global total, replacing the U.S. as No. 2 in the world. China's luxury fashion market grew at an estimated 12.1% in 2009 and is expected to become the world's largest by 2015, Trinity says."
This is a great article,
it highlights key trends which came out time & again, during my discussions with key CXOs in group and individually from MNCs and Entrepreneurs (chatham house rules but I met top guys CEO, COO, head of Business unit (most profitable) of luxury brand, government advisors/lobbists, Government e.g. Citi group, Remy Cointreux, Dior, Capital Today, APCO worldwide, CBBCs etc. )
Where key trends I have observed are:
1.) 2nd and 3rd tier cities have populations in times more than major european developed countries, competitions are much less however, so get there first & maybe even be the 'first' category/high end/premium brand amongst the local population (despite they might not even have considered buying such products), make sense. (of course, product/service might need to be adapted to local tastes/expectation/requirements)
2.) basis of competition might have shifted due to local culture/market structure, as I have previously tweeted briefly on @GarethWong, reason for the earlier profitability and scalable & sustainable growth (& profit) of KFC vs. MacDonald was due to KFC created their own "efficient" and profitable fulfilment arm that meet their own requirements, able to deliver AND keeping cost down. Li & Fung as mentioned in the articled did something similar!?
3.) Wealthy population as viable domestic market for not only foreign brands but also local developed brands. As China will have the most number of millionaires worldwide, it stands to reason that one can 'create' and 'adapt' for this population. However, their taste is being developed as we speak, it is mostly western worshiping so far, but that might most likely be due to lack of choice also.
there are many more but sadly I have only got time for the above three today (well on & off line to prepare for it), I just don't understand how other bloggers can write great and long articles..
back to meeting people in person which I prefer above all else (the pleasant ones anyway!).
@GarethWong
Posted by AI King at 14:43 No comments:

RTHK ON INTERNET 香港電台網上廣播站: 功夫傳奇
Great heritage programmes world over should have these freely broadcasted ..
like BBC's internet revolution.
well done guys!
Posted by AI King at 14:07 No comments: