Must read! London Olympics 2012: where does the money come from - and where's it being spent? | Sport | guardian.co.uk

London Olympics 2012: where does the money come from - and where's it being spent? | Sport | guardian.co.uk: 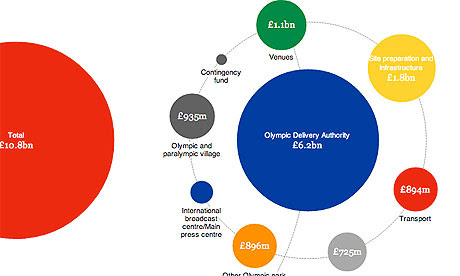 Well, it will be a big challenge, as she will lead 'as an outsider' on a military jet plane with jittery board who might have trigger happy fingers on her seat's eject button...

plus internal politics and pressure in creating 'new vision' to consolidate now perceived disparate yahoo... turnaround is a different Kattle of fish.
good thing is that seems like Marissa has a loving family and now as millionaire, she can stay true to her new vision for Yahoo and thus has a bullet proof parachute whether got ejected immaturely or not..
my suggestion? she need to be in it to win it, turnaround take time, probably 2-5years if not longer.. she therefore need time, and given the quarterly earnings pressure etc. it would be very difficult to implement and see results (except cost cutting which sadly is not good for long term future of company except cutting dead woods), therefore, my suggestions would be:
1.) buy time, if it is cheap enough, and she is bold enough, take Yahoo private, (share price at all time low!?), with hopefully a decent war chest for acquisition that supports the medium to long term vision created (next point).
2.) devise a medium & long term vision that has all the internal stake holders buy-in, and work towards that, and using her strength of products/design, and focus on what customers might not what they wanted in the first place... Yahoo is strong in rated pages (passed sell by date?) and even pictures (flickr) and even groups... thus, need a 'new ground'
3.) find a new ground that not any of the majors have a stake in vs facebook, google, microsoft.. seems to me secure enterprise could be one (google is trying the 'cloud' enterprise from scratch), maybe its time to buy & merge in some best in clase enterprise companies like blackberry?? (I trust Thorsten would not listen to my previous suggestions http://t.co/1K4UnFj . Yes, it would be easy picking if Blackberry is not under strong management! )
Good luck with new job & new baby, good that Marissa is a lady, otherwise, there will be new mistress soon..
Joking aside, glad that most likely all my flickr photos & yahoo groups are now in 'safer hands'. ;-)
garethwong
Posted by AI King at 08:56 No comments:

Well worth the read but below is KEY!

"3. People buy things because of what having it says about them. This is what The Atlantic author mentions when he talks about the desire of Millennials to live in urban settings. Though I don’t pretend to speak for everyone in my generation, for me this choice has almost nothing to do with being anti-car. Instead, it's about all the other things a "non-car life" represents: it helps me be more environmentally conscious, socially aware, and local. This distinction of purpose may seem nuanced, but motivation is a powerful differentiator (perhaps one of the most powerful).
WHAT TO DO: Connect people to something bigger than themselves through your product or service. A bigger impact is almost always there, we just tend to forget about it.
As we watch the old definition of "ownership" go extinct, how will you leverage the unique connections your product or service could create? It could very well mean the difference between life and death for your business."
Posted by AI King at 15:34 No comments:

Like any cross boarder industries, only a worldwide harmonised rules would work.. as otherwise, it would be either

1) compliance for some and
2) lets find the best loophole for some..
3) or combination of the two..

however there is no escaping a universal fact:  "No one country can legislate for the world" and therefore, sadly this will be the status quo going forward for the future unless there is some catalyst for change, to bring some #common standards and measurements..

Only when there is a common benchmark, would industry players can compete fairly and thus can focus efforts on creating new and better products and also adopting best practices to protect consumers, like responsible gaming and supporting charities like GamCare etc.


"The ruling highlights once again the fragmentation of EU Member States' approach to gambling regulation and is a reminder that while outright protectionism will not be tolerated, there is still room for some Member States to take a more zealous approach than others. Reacting to yesterday's judgment, the European Gaming and Betting Association is reported as stating that the ruling "confirms that Member States cannot regulate the gambling market in isolation but need to take into account protection guaranteed by other Member States". With Michel Barnier's recent commitment to pursue Member States whose gambling legislation infringes EU law and the upcoming publication of the European Commission's gambling action plan (see our recent update for further detail), we will wait and see whether this judgment has any impact on the future harmonisation, or divergence, of EU gaming regulations.
"

must watch, still same after 3years! "Bacon as a Weapon of Mass Destruction"

"Bacon as a Weapon of Mass Destruction":

its incredible indeed... 3years now and nothing has changed!

however, I would change number 1 to something different, which will enable 2 & 3 and more, which is:
1.) Take RIM private by a 'strong business leader' (as a second option with present CEO & board with some strong visionary to support and lead them strategically)
this will:
a.) give them time to sort itself out without the demand of public market shareholders, lets be frank, share price and market cap does not necessary equates to viability of company, but mostly short term 'sentiments' of it..
b.) as it is a cash flow rich company, with good IP, good contracts and revenue streams directly with MNOs/MVNOs and enterprise distributors, after cost cutting, and bringing it private, it should have enough time to review.. yes, focus on 2. & 3. but review the proposed 1. maybe getting rid of H/W but there are many ways to skin a cat..
I have been saying a long while (yes, I emailed unsolicited advice to Thorsten).. Sadly appointing bankers would only do one thing, which is advising how to break up the company and sell as it is obvious and easy thing to do (& profitable for all, except the real stake holders of RIM, namely devoted users like myself!).. they would not have advised him to keep his nerves, take on the responsibility, risking personal reputation and future jobs and take the company private and try to rescue it.
It is very stupid to fight the fight of APPLE in the game it created called the iPlayground.. RIM should stick to what it does best, does it 10x and 100x better and let others emulate them. it will take a year or so but being private, it can have enough time to do so!
Definitely do:
I.) looking at productising AND improving reliability of BBM which some might argue it is RIM's crown jewel..
II.) definitely emulate the success of app store, but focus on security, quality and efficiency of the apps, as I see the size of the apps typically goes up exponentially which is stupid (may have technical reason and it could be RIM's platform's fault!? or lack of good application developers!?)
III.) marketing need to be much more savvy.. like in UK, BlackBerry sponsored the whole Sky Atlantic channel.. great, but hey the sky mobile app does not work on blackberry!! surely they could have used deals like this to ensure that there is a coherent marketing strategy..
IV.) or maybe it is really time to cut all marketing and focus 100% on products and services, learn from likes of Zappos & others, Thorsten & Frank should ask Jeff to watch the to be launched movie http://thenakedbrandfilm.com/ it might fire them up.
but all the above is meaningless however, if they are taking the easy way out to break the company and sell them..
It would be a tragedy.. akin to during the dot.com boom when PCCW bought HKTelecoms, no doubt in this case whoever might buy RIM's asset would not be paying as much as PCCW did for HK telecom in 2000.
RIM breaking up and selling is good for the short term, shareholders and easy for the management but from stake holders (like me, loyal BlackBerry users) and also in fact the telecom operators' point of view, RIM keeping faith, sorting itself out, and helping the telecom world to fight the upstarts of likes of iParty is key.. RIM's management might find they may have more friends in telecoms world (esp. MNOs/MVNOs) if they can help maintain a viable and equitable revenue sharing with the operators and rest of value chain.. maybe a pan industry open-standard app-store?
some leadership from RIM could in fact save not only themselves but also loyal customers and in fact the telecom tribe (who is more into capital intensive and highly regulated business).  Google/Android/Apple will NOT be sharing & paying for data.. just that point will get the MNOs thinking!
I am telecom guy through and through, this should maybe form a warning for other telecom firms.
Happy to hold Thorsten's hand if needed, call me.
Good luck!
@GarethWong
Posted by AI King at 01:21 No comments:

key website below to check what supplements are ok:

http://www.informed-sport.com/
Posted by AI King at 12:22 No comments:

Big thank you to David.

I learnt most from below but not sure if I can get ISBN for Europe/Asia!? anyone knows?

"11. Buy your own ISBN -- and create your own publishing house.
If you have market aspirations for your book, buy your own ISBN (International Standard Book Number) and create your own publishing company.
(Credit: www.isbn-us.com)
Even if you go with one of the subsidy presses for convenience's sake, there's no reason to have Lulu, CreateSpace, iUniverse, Xlibris, Author House, Outskirts, or whomever listed as your publisher. For around $100 (what a single ISBN costs) and a little added paperwork, you can go toe-to-toe with any small publisher. Lulu.com sells ISBNs, other self-publishing companies don't. The complete list of sellers is here.
Note: Most self-publishing operations will provide you with a free ISBN for both your print book and e-book but whatever operation provides you with the ISBN will be listed as the publisher."